Rosilyn Temple became an activist for nonviolence in Kansas City in 2011 after the murder of her 26-year-old son, a crime that is still unsolved. In trying to work through her grief, Temple said she understood she needed to do something to stand in the gap for her child and to help other mothers who were experiencing their own losses. That pain, and the determination to lift up her voice and the voices of other women, led her to establish KC Mothers in Charge.

Temple went to work as a case manager for Veronica’s Voice. She also became a regular volunteer for Ad Hoc Group Against Crime, showing up at homicide scenes to comfort families. During her time with Ad Hoc, she put together her ideas for a program to support mothers like herself. She learned about Mothers in Charge, Inc., which was started in Philadelphia in 2003 by a mother who lost her child to homicide. Temple reached out to the national organization’s director, who guided her through the process of building a Kansas City chapter. She began KC Mothers in Charge as a volunteer effort housed within Ad Hoc, but in 2014 she independently secured funding to establish KC Mothers in Charge with a grant from the Kansas City Missouri Police Department and Kansas City No Violence Alliance. Temple said her consistent presence at homicide scenes and help for grieving family members helped her forge relationships that brought her the needed startup funds.

Over the past six years, Temple has visited more than 500 homicide scenes. While police are securing the scene for proper investigation, Temple provides compassion, care and trauma-informed crisis counseling to family members. Families receive referrals to financial, legal, substance abuse, employment and medical professionals. She has also organized volunteer groups of mothers to conduct community vigils in remembrance of loved ones, and to canvass neighborhoods after crimes to distribute gun locks and encourage residents to provide information to law enforcement that might help solve the crimes.

Temple continues to explore new approaches to reducing community violence. She plans to start a program that focuses on victims of non-fatal shootings. “We want to help families process their trauma and figure out how they can move forward,” she said. “I see this as prevention and hopefully a way to stop retaliation so that victims can help solve some of these crimes.”

Her work has been recognized locally and nationally. She was honored as 2015 Citizen of the Year by The Kansas City Star and recognized by Kansas City’s FBI Division with a Community Leadership Award. She received the KC Crime Commission’s Alvin Brooks Award in 2018 and the NAACP Carl Johnson Humanitarian Award, among other recognitions.

Temple said she is eager to learn from the experiences of the other leaders in the Centering Black Voices initiative. When asked about hurdles she deals with in trying to grow her organization, she said, “Leadership can be lonely, especially in an organization that operates 24 hours a day. People forget that the reason this organization exists is because I lost my own child – it wasn’t work I imagined for my life, but it happened to me, and now this is my work and I feel the pressure to always be strong.” 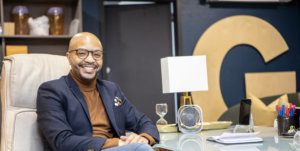